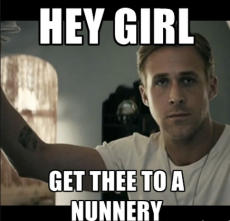 I just saw Shakespeare’s Hamlet off Broadway at the Classic Stage Company. The production features Peter Sarsgaard as a hipster Hamlet, drinking, sniffing coke (meth?) and lackadaisically moping around, while delivering his lines in a way that uncannily grabbed my attention. His perfectly laid-back, but pained delivery turned the super-familiar, “To be or not to be…”, “Oh that this too too solid flesh would melt…”, “Alas poor Yorick, I knew him…” into brand-new-seeming phrases.

Hearing these lines again also made me think of the modern Internet meme-like quality of much of Shakespeare. How different is “To be or not to be” from President Obama’s “Yes we can!” or Sweet Brown’s “Ain’t nobody got time for that.”? Why do we keep watching and performing these phrases again and again? One reason might be that each time we hear these recognizable words in new contexts, we experience something different (See also, modern day poetics post). How would this work with Shakespeare?

I decided to choose one meme-like phrase of the play and focus on that, and Sarsgaard’s performance struck me most during the “Get thee to a nunnery” scene. I had remembered this scene as one of an angry Hamlet ranting at Ophelia (his girlfriend) telling her, “Get thee to  a nunnery!”, shoving her around crazily. But in Sarsgaard’s version, Hamlet and Ophelia (played by Lisa Joyce) seemed not really to be talking to each other at all. Hamlet wasn’t ever yelling and rarely even directing his speech at Ophelia, but musing to himself about the pointlessness of marriage, the fickle nature of all women. He closed the scene in angst, leaving the stage without looking at Ophelia:

I say, we will have no more marriages:

Those that are married already, all but one, shall live;

The rest shall keep as they are. To a nunnery, go.

Throughout the scene, Hamlet came off as depressed and disillusioned with all womanhood and humanity. Ophelia seemed heartbroken, for losing Hamlet, and for Hamlet losing his mind. Each seemed not to be talking to, or even addressing each other. The scene, as played by Skarsgaard and Joyce seemed about painful and isolating misunderstanding. It seemed deeper and sadder than I had ever remembered.

I turned to YouTube: How do others make meaning out of these words?

Though this scene takes a long time, Gibson cuts nearly half of the text. He never even says “get thee to a nunnery,” “make thy way to a nunnery” or even, the final, “to a nunnery go!” Instead, he yells a lot and pushes Ophelia around.

Next, I looked to the more elegant Kenneth Branagh & Kate Winslet (1996) movie version. Here Branagh includes all of Shakespeare’s text, including “Get thee to a nunnery.” And he delivers it directly to Ophelia’s face.

Branagh, like Gibson, but not to such a degree, yells a lot while storming around a huge castle atrium.

Ethan Hawke (2000) takes a different approach. He is a modern guy, involved in business dealings in New York, up in a high rise, holding a beer (Carlsberg). But, like Gibson & Branagh, in the nunnery scene, he emotes directly to Ophelia. He is massaging her shoulders as he delivers his “Get thee to a Nunnery” line, and oddly pleading with her when he tells her why she should go, “We are errant knaves all; believe none of us”:

One YouTube commenter (the only one) suggests a possible problem with this performance:

Big Stars are not the only ones performing Shakespeare on YouTube. So, I started looking at non-professional versions performed by students in English classes. My favorite was an unlikely performance by “Hong Kong students”: 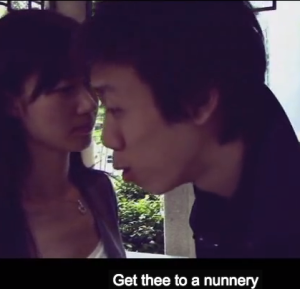 This version came closest to the painful sense of detachment and loneliness I got from Sarsgaard’s performance. Hamlet is staring off into space for the “get thee to a nunnery” line. And, many of the other lines cut to imagined, dreamlike spaces (and distinctly non-Denmark like settings): 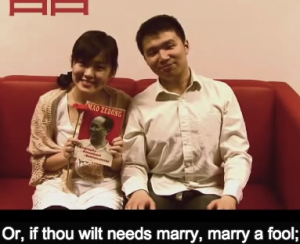 This HK Students’ version might speak more to other high school age students (especially in Hong Kong) than any of the professional productions do. And, collectively, this small set of YouTube scenes (and there are many more) illuminate the potential range of interpretations of a single scene, even a single line, of Shakespeare—including the potential to mock Mao Zedong!

Still, many High School English students seek out the “Spark Notes” website rather than YouTube to try to figure out what is going on in Shakespeare. How does Spark Notes represent the Nunnery scene?

Hamlet is very nasty to Ophelia and tells her to become a nun.

After seeing a YouTube repository of Shakespeare scenes, performed in dozens of new ways, this bare bones description disappoints. Unlike a Spark Notes synopsis, YouTube performances of classics don’t attempt to generically summarize THE meaning of a scene. They collectively communicate the huge range of potential meanings behind not only Shakespeare, but all our language. Also, inevitably, some performances work, some don’t. Why? What comes together to make a scene? How could centuries-old drama make sense in our world? Why do some performances speak more to certain people than others? To explore these kinds of questions, get thee to YouTube!

Have you encountered YouTube versions of “classics”? Have you any favorite versions? Can YouTube help students connect to literature and understand language in this way? Please comment below!

2 thoughts on “Making a Scene: Get thee to YouTube”