No community is truly “monolingual”—even when they think they are!

Since 2006, this sign on Geno’s, a cheesesteak restaurant and tourist destination in South Philadelphia, has become infamous:

This is a good (if distasteful) example of “perceived monolingualism” –the perception that Geno’s patrons speak only English and that once the non-English-speaking clientele leaves, there will be a monolingual environment at his cheesesteak emporium.

However, for over a decade, widely-circulating news stories (by citizen sociolinguistically inclined bloggers and journalists) have pointed out that the Geno’s sign, “This is America: When ordering ‘Speak English’”, falsely presumes that we speak just one type of English in “America,”  and that everyone going to Geno’s knows what is meant by the word “English.” In other words—they were pointing out “perceived monolingualism”.

One author, for example, was quick to note the irony that even Geno’s English-speaking clientele didn’t exactly speak “The King’s English”:

“Of course, it’s not as if native Philadelphians speak the King’s English either. A Philadelphian might order a cheesesteak by saying something like, “Yo, gimme a cheesesteak wit, will youse?” (“Wit,” or “with,” means with fried onions.) To which the counterman might reply: “Youse want fries widdat?”

On top of the “native Philadelphian” accent required, the specialized terminology for ordering cheesesteaks might even be heard as a “foreign language” by English-speakers not from Philadelphia.  Several websites offer guides to help outsiders through the stressful process of ordering cheesesteaks here.  These guides suggest that another language (Cheesesteakese?), with its own specialized vocabulary, pronunciation and grammar, is required at Geno’s. Typical tips include advice like this:

The author of the above guide to ordering cheesesteaks also describes her own version of multilingualism, as she attempts a modified (yet successful!) version of Cheesesteakese:

“I stepped forward, spoke up, and ordered an “American. Without.” I couldn’t quite bring myself to go for the full “d.”  Successfully ordered, I took my cheesesteak…”

In these examples, citizen sociolinguists have precisely pointed out the language needed in the Geno’s world.  “Order in English,” the sign commands, but which English?  A huge variety of Englishes are on display in service encounters there.

Reporters have also pointed out how Geno’s competitors have assessed the multilingualism in play at cheesesteak counters.   A manager at Tony Luke’s, responded to the “Order in English” sign with an allusion to Cheesesteakese, saying all customers are welcome at his place…

Another competitor, Kathy Smith, manager of Pat’s, spoke in favor of multilingualism, but brought up a different type of language she would rather not hear at her counter.  Speaking of the Geno’s sign, she said,

“That’s the most ridiculous thing I’ve ever heard in my life. I’d rather listen to the Spanish than the foul language of the college students.”

As the controversy simmered on, it became clear that purity of English was not the real issue behind the Geno’s sign. Instead, Joey Vento (original owner of Geno’s) seemed to use the “perceived monolingualism” of the “Order in English” sign as a shield against anyone who seemed different from him.  Monolingual language demands were a proxy for his own xenophobia. The anti-immigrant sentiment behind the sign became explicit when he posted another sign above it:

A movement began to remove the signs (now plural).

Eventually, this controversy, which took place largely via the popular press (and, through citizen sociolinguistic argumentation), had a tangible impact.  In 2011, Joey Vento died (of natural causes) and in 2016, prior to the Democratic National Convention in Philadelphia,  the signs quietly came down.  Joey Vento’s son and current owner of Geno’s (named “Geno” after the restaurant) asserted his opinion in a press release on the sign-removal: “It’s about what you do and what your mark in life is, and [I want] to change that mark in life.”

Possibiliy illustrating that “mark in life,” even as the “Order in English” sign was removed,  tokens of Cheesesteakese continued to mark headlines like these:

And, finally, shortly after the signs came down, a Philly.com reporter, Helen Ubiñas, ventured over to Geno’s and conducted her own citizen sociolinguistic experiment—ordering her cheesesteak in a gorgeously creative  multilingual combination of Spanish and Cheesesteakese.

As she recalls, “in my best Nuyorican Spanglish, I let it rip:

She posted the results on Twitter, concluding with, “Gracias Geno’s!”: 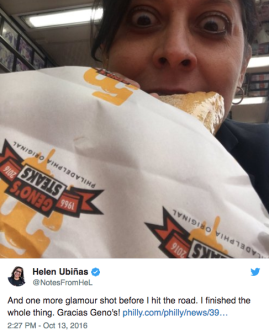 3 thoughts on “Pointing out Perceived Monolingualism:  Citizen Sociolinguistics in Action”