Editor’s Note:  This is a guest post by Peizhu Liu, an Educational Linguistics PhD student at the University of Pennsylvania.

A year ago,  a newly-coined expression – 田园女权(Countryside Feminism ) –attracted my attention on Weibo, which is one of the biggest social media platforms in China, with over 445 million monthly active users as of 2018 (“Sina Weibo”, 2019). Even though I had already sensed the negative connotation of the expression by reading the online discourse surrounding it, for example,  我不是反对女权，我是反对田园女权 (What I am against is not feminism but countryside feminism), there were still questions that puzzled me: what’s the origin of this expression? What does it mean exactly? Who coined it, and for what purpose?

A thorough search online led me to many possible explanations. For example, according to Feng (2018) and Zhifu (the Chinese equivalent of Quora), the term “countryside feminism” (tián yuán nǚ quán) has a reference to the Chinese “rural dog” (tián yuán quǎn), a breed that is indigenous to China, but viewed as lowly and without a pure lineage. By linking Chinese indigenous dogs with Chinese feminism, the term disparages the Chinese feminist movement as outside the mainstream women’s liberation movement in the West, and attaches to it a connotation as something coarse and unsophisticated.

In addition, Jikipedia (Figure 1), the Chinese equivalent of Urban Dictionary, defines 田园女权 (countryside feminism) as follows: These women fight for gender equality on the surface; however, they in fact only desire the same rights that men have, but refuse to take on the responsibility (“中华田园女权”, 2017).

Despite the definitions that I found online, I was interested in learning how this term – countryside feminism – is utilized by internet users on social media. Since Weibo is one of the most popular social media platforms in China, and since it allows people to publicly express themselves in real time and interact with other users they might not know (Programmer, 2018), I chose it as the site where I collected the data.

I posted a survey on Weibo using my own account (Figure 2). The questions in my survey include, but are not limited to:

My goal was to collected 30-50 responses, but what happened greatly exceeded my expectations. Since this questionnaire was re-posted by quite a few influencers, most of whom are feminists, I received 392 comments within the next 24 hours. Due to time constraints, I randomly selected 100 comments to analyze. 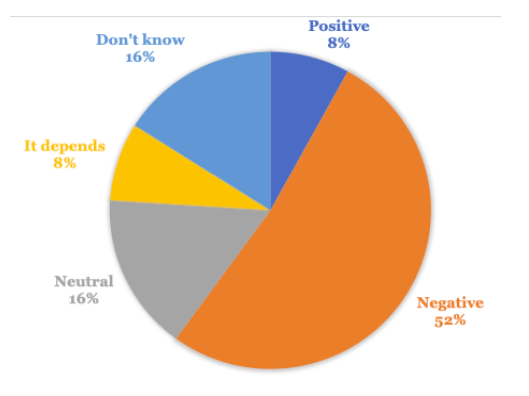 In addition, as I visited the home pages of 15 well-known feminist accounts (each has at least 100,000 followers) and pages of 30 respondents who claim to be feminists, another interesting finding emerged: none of their account names include the term “feminism/feminist”. Even in the section of the profile description, the term “feminism/feminist” is rarely found (see figure 4 and 5, for example – they are two of the most famous feminist Weibo accounts).

First, the overall connotation of feminism on Weibo is negative.

Second, the most popular definition of countryside feminism given by Weibo users is that “it was coined by Chinese men as a way to stigmatize Chinese feminism because they feel that Chinese feminism is coarse and vulgar”. This definition aligns with the perspective offered offered by Feng (2018) and Zhihu: “By linking Chinese indigenous dogs with Chinese feminism, the term disparages the Chinese feminist movement as outside the mainstream women’s liberation movement in the West”. In my opinion, an “inferiority complex” (Cohen, 2015) which is deeply engrained in Chinese people’s collective memory is reflected in the term of “countryside feminism”. Also, let’s look at the third-most popular definition, which was shocking to me. It says that “countryside feminists hate Chinese males, but love European and American males”. In this definition, not only the “inferiority complex” and “ever-intensifying gender antagonism” (Wu & Dong, 2019) but also the antagonism towards the West are manifested.

In addition, according to her work on online space for feminism in China, Han (2018) pointed out that “feminism” is one of the most sensitive subjects to the Chinese government’s censorship policy, and feminist Weibo accounts which are thought to be too “radical” are very likely to be suspended. A few years ago, a feminist Weibo account: Feminists’ Voice, was silenced because of a post calling for women’s strike on the International Women’s Day (Figure 6).

Under such strict control, it is no wonder that feminists on Weibo seem to avoid using the term “feminism/feminist”. I argue that the strict censorship on “feminism” also contributes to the anti-feminist environment on Weibo.

To sum up, feminism might be stigmatized in various ways all over the world, but according to this analysis, feminism is stigmatized with specific Chinese characteristics within the societal context of China. Furthermore, these online discussions about the terms “feminism” and “countryside feminism” enable us to see a glimpse of the status quo of Chinese feminism. It faces a conflated backlash from the patriarchy, a national inferiority complex, the antagonism toward the West, and the government’s censorship.

Do you have any insights about or experiences with the term countryside feminism?  Please comment below!

Cohen, A. (2015, August 3). China Still Fighting Its Own Inferiority Complex. Retrieved from https://www.worldcrunch.com/culture-society/china-still-fighting-its-own-inferiority-complex.

Programmer, W. C. M. (2018, June 25). What is the difference between WeChat and Weibo nowadays? Retrieved from https://medium.com/@wechatminiprogrammer/what-is-the-difference-between-wechat-and-weibo-nowadays-33db40a73e76.

View all posts by peizhuliu