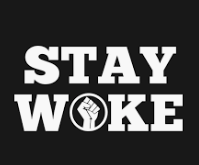 I just read and relished every word of Deborah Cameron’s blog review of 2018, “The W-Word,” about the highly contested word “woman.”  Strangely, when I first saw the title, even knowing her blog generally addresses issues about women (pardon me!) and language, I thought the W-word in question may have been “woke,” another word that has been used and contested a lot this year.

My mind may have gone in this direction because a friend had just e-mailed me with this query:

Tell me about the word “woke.”  I see it used in so many ways and places, but I don’t understand if it’s an adjective, verb, or what?

Good question!  I was hoping Cameron’s blog would answer it for me.  But no: wrong W-word.  Then, I thought, oh geez!  Woke! I should not be the person to answer this.  My intuition suggests that much use of this word verges on what I have discussed elsewhere here as “Linguistic Gentrification”. Claiming any expertise about it seemed like overstepping.  But… those thoughts didn’t stop me from unilaterally formulating my own answer and firing it off:

There is a lot to say about the word “WOKE.”  I love and hate that word.  In general, I would say that people use it as an adjective to describe someone who is aware that we live in a diverse world full of many different perspectives and that we should not write those off without considering them.  As in, “They are woke.”  If you say that about someone, I would say it means that person has a broad perspective on the world and doesn’t just see things from their own possibly white middle class standpoint.   They understand different points of view, different aesthetics and moral frameworks than just their own.  They are fully behind the “Black Lives Matter” movement and probably have a sign in their yard that says “Hate has no home here” written in several different languages and scripts.  But if they are truly “woke” they also know that even being able to have a yard and put that sign in it means they are privileged.  They would also understand that I am using singular “they” in this description so that I don’t have to use a gendered pronoun.

A non-woke person would say something like “All Lives Matter” (not just “Black” lives).  They think they have a certain sense of taste and morality because it is The Best Way to Think—not because it is a cultural perspective they grew up with.  I think of a supremely non-woke person as someone who is impossible to talk to because they think they are superior but are ignorant and not willing to learn.

That said, the word “Woke” can be used, as you point out, in lots of different ways, and it can be just another way of being judgmental about other people. So, despite my endorsement of “woke” people, above, I try not to use the word!

Then, after sending this and feeling sheepish about the possibly un-woke level of confidence and verbosity in this response, I decided to poke around a little and see what others are saying about the word “woke,” starting with the usual suspect, Urban Dictionary.

I was immediately glad I had not sent my friend there. Most entries were negative and layered with snarky irony. The “top definition” reads as follows:

First of all–minor point–this definition makes it sound like “woke” is a noun: “The act of being very pretentious…”. Then the author goes on to use it as an adjective.  Leaving that aside, the content belittles any kind of compassion, empathy, or open-mindedness that I associate (perhaps naïvely) with the best features of being a woke person.

The rest of the definitions (a total of seven) were similarly down on the word. A few (especially definition #5) also pick up on the idea that “pretentiousness” or “superiority” is involved in being woke, and imply that this pretentiousness is attached to liberalism (suggested in #5 by reference to the Huffington Post):

“A state of perceived intellectual superiority one gains by reading The Huffington Post.”

A couple definitions (#2 and #4) make allusions to “The Matrix,” equating woke-ness with taking the “red pill.” (For those not familiar with The Matrix, the red pill enables human beings to see a reality we are usually blind to—namely, that we are all floating in human size jars while machines harvest our metabolic energy and feed us an illusion that we are livin’ the dream—or at least trying to.)

And a couple definitions (#3 and #6) take on the grammatical form directly (I assume ironically) as in:

(Try to ignore the strange (Einsteinian?), time-twisting formulation that suggests one can wake up and actually be in the past tense).

The least popular definition (#7) seems to me the best and most even-handed:

I like this one because it gets at the social “consciousness” involved in the term, the good intentions behind those who use it (it “comes from a genuine place”), but also the overuse, and the potential for it to be used unthinkingly in “fake-deep” ways.  Leaving aside the possibly contentious use of “N—A”, this definition seems the most, wait for it… “woke” to me.

So why is it the least popular?  It is possible that the popularity of #1 and the relative unpopularity of #7 tells us more about the people who vote on Urban Dictionary definitions than something important about the word “woke”. I would like to write them all off as being silly and more ignorant than I am. But this takes us back to my first hesitation:  Why would I be the expert? Those urbandictionary.com authors and thumbs-uppers (and many more like-minded people who are not writing on urbandictionary.com) are precisely those who build that word’s meaning. My own opinion may be irrelevant. In practical terms, my view certainly matters less than the collective voice of people talking about and using language, coming up with and adding approval or disapproval to definitions and illustrative sentences on Urban Dictionary and everywhere else. I would also suggest venturing beyond UD, of course: A simple google search points to important connections between the phrase “Stay Woke” and African American struggles for social justice.  But just reading through those seven “definitions,” would probably be more useful to my friend than my singular e-mailed response, because these definitions give a sense of the ideological minefield one steps into when using that word!   People (and I am just one of the lot of them) create the meaning behind words.

So, whatever “woke” means, its best feature may be its potential to start conversations about “woke-ness” (whatever that is!) and, in the process, about a world full of different perspectives. In this way, conversations about the word “woke” may have something in common with Cameron’s discussion of that other W-word, “woman.”   As she points out, meanings of any word, and the inevitable changes in those meanings

“…can neither be imposed by fiat nor prevented by appealing to some higher authority.”

So, I’m suggesting we keep talking about these words and many more!  If we do, we will inevitably get more “woke” ourselves—whatever it ends up meaning (and let’s hope it’s not pretentious or fake-deep!). What does “woke” mean for you? Whom or what sources would you consult to find its meanings? Please weigh in!  Comment below (and consider going to urbandictionary.com to give your favorite definition a thumbs up or, better yet, enter your own)!

Most people recognize the process of neighborhood gentrification: A once affordable neighborhood with character becomes transformed by wealth into a place that the very people who nurtured the character of that place can’t afford to live in anymore (or don’t even want to). With a moment of thought, you can probably think of a few examples of linguistic gentrification too: Everyday, “non-standard,” yet uniquely expressive language gets repackaged as cool, trendy, even standardized—so much so that the original users may no longer want to use it.

When neighborhood gentrification strikes, features of old run-down structures originally organic to a way of life—like a breezy front stoop or an original ice box—get repurposed as signs of sophistication. Likewise, linguistic gentrification: Features of language originally part of a way of life—and some looked down on in schools or marked as “non-standard”—become markers of sophistication, local knowledge, or social cachet.

Often these gentrified features originally come from speech typified as “African American.” Those very features deemed “non-standard” resurface as expressively powerful, and get used by white people. So, while most English teachers will decry the use of a “double negative” as incorrect, students in an Ivy League University will use the phrase, “Ain’t nobody got time for that!” strategically and to great effect (see previous post, Language Awareness II).

The word “finna” has also gained popularity these days in suburban Honors English classes I’ve been working in. It even appeared in a collective slang word cloud they created last semester:

Finna also appears on the Internet in this official looking entry (the very first hit for a google search): 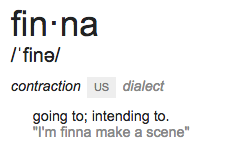 “Shawty,” “salty,” “jawn,” and the ubiquitous, “yo” are other words gentrified by suburban Honors English 11th Graders.

But when asked about “finna,” “salty,” or “shawty,” few students can provide a sense of the social history of these words, aside from their own personal contact with them. Most assume they just were part of auto-tuned YouTube songs or funny Vine videos that somehow went viral. A few mention Kanye West as a good source of these expressions. In conversation, one student mentioned that “finna” might come from “fixing to,” a “Southern” phrase. But, others had no idea that “finna” might be parsed that way.

Just as neighborhood gentrifiers vary in their knowledge of the history of the city they occupy, linguistic gentrifiers have varying levels of awareness of the historical foundation for these words, phrases or features of pronunciation. And, newcomers to words and phrases like “salty,” “ain’t nobody got time for that,” or “finna” use them with wide-ranging degrees of finesse. Some gentrifiers—of cities and language—surely recognize underlying character and build on that. Yes! Others might lack that sensitivity, driving away residents and speakers, losing generations of history and life ways that built the original character that drew us to those places and expressions.

Do you recognize linguistic gentrification around you? Do you partake in the process? What are the different types and what are their effects? Please comment!