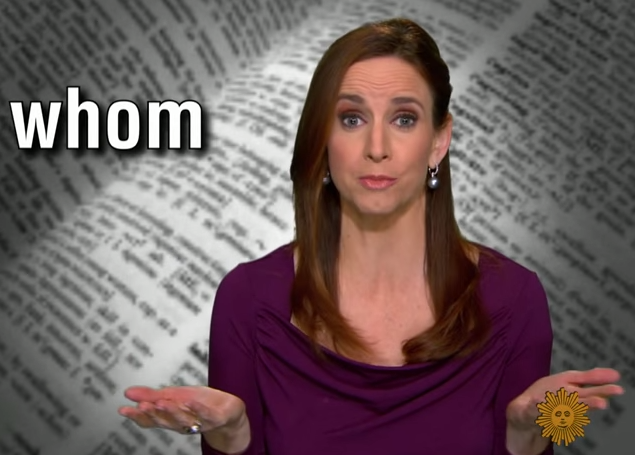 What if you had to fill in a pie chart with different slices representing all the ways you speak? How many different slices would there be? Or, would you have just one whole pie called “Perfect English”? Would that be ideal?

Some news media, of late, suggest that the “Perfect English Pie” should be the goal. In this editorial today on CBS Morning, Faith Salie bemoaned the fact that many people do not follow her rules for proper “whom” usage.

Salie implies there should be only one uniform type of slice in our language pie, the one in which we are “speaking well.” This is especially true in “America,” Salie says, because according to her, most Americans only speak English:

Very few Americans, myself included, speak more than one language fluently. So, the least we can do is try and honor English by speaking it well.

Besides, she added, using “whom,” just makes you feel more special:

The two comments posted, which don’t seem to even hint at irony, endorse Salie’s perspective:

Two days earlier, a Saturday New York Times front page story voiced another view on cleaning up language—not “who” and “whom,” but a certain way of saying “Wiscahnsin.” The headline reads:

For 2016 run, Scott Walker washes “Wiscahnsin” out of his mouth

In this video, and the accompanying article, the author points out that Mr. Walker, now that he is running for national office, has changed how he speaks:

[Scott Walker] has left “Wiscahnsin” back home in Wisconsin. He now wants to strengthen the economy, not the “ecahnahmy.”

At the end of the essay, Jennifer Horn, Chairwoman of the New Hampshire Republican Party remarks:

I didn’t hear it [the Wisconsin honk]. Good for him, good for him.

Both Ms. Horn and Ms. Salie voice the view that we need to avoid certain ways of speaking and use those that are proper or less local seeming. Ms. Horn admires Walker’s new Wiscahnson-free diction, suggesting this makes him more palatable as a candidate. And, Ms. Sadie tells us we need to be especially protective of English, since it is the only language most Americans speak.

But, how do “Americans” really use language? Walker may be ditching his Wisconsin “honk,” but he is not replacing it with a sublime original super-perfect “American” speech. Instead, the article suggests, he is picking and choosing different types of language, adding variety to his language pie. When addressing Republicans in South Carolina Mr. Walker told them, in a characteristically un-Wisconsin-like way, that he enjoyed “talkin’ with y’all.”

To connect with people, even as a Republican in the United States, only speaking English, Mr. Walker’s Language Pie must contain some variety. He might be using “y’all,” in South Carolina, but he probably doesn’t in New Hampshire. And he may still talk about the “ecahnomy” when he is back at the family dinner table in “Wiscahnsin.”

But let’s suppose people are not running for office. Do people in the United States still need several different slices in their Language Diversity Pie? Or should they just focus on “speaking well” as Faith Salie suggests?

Last week, exploring this angle with 11th graders and their teachers, we had them create their own language pie charts. In just a few minutes, many divided their pie up into seven or more sections, including different language for the following slices of social life:

Most students specified slices for “friends,” “adults,” “home,” and “school,” adding varying degrees of nuance. “With animals” was a pie slice only one student came up with at first—but after being reminded of special animal pet voices, many classmates agreed they would add this slice to their pie too. (I doubt they use “whom” with their pets.) Momentary moods were crucial to a few students—clearly different ways of speaking come out when tired or depressed, angry, or giddy.

Nobody spontaneously mentioned anything about languages other than English. But, when I asked about multiple languages in their lives, several students had more slices to add to their Language Diversity Pie:

A ten-minute discussion revealed a profusion of ways of speaking, languages and “accents” that fit into any one individual’s pie.

These teens easily recognize the distinctive relevance of all the slices of their pie at different moments, or with different people, or to convey different moods. Even these young 16-year-olds, in Honors English, most of whom have spent their entire lives in one suburban community, have wide-ranging communicative repertoires, and can recognize their distinctive utility.

I hope these wise 11th graders can also address those media voices, like Faith Salie, that suggest our language goals should lean toward less language diversity in our pies. Today’s teens will need to use different kinds of language to do many things: babysit, snuggle with their cat, comfort a friend, write poetry, mediate neighborhood conflict, apply for college, be President…

One unitary language pie called “Perfect English” could never do all that.

What slices make up your Language Diversity Pie?