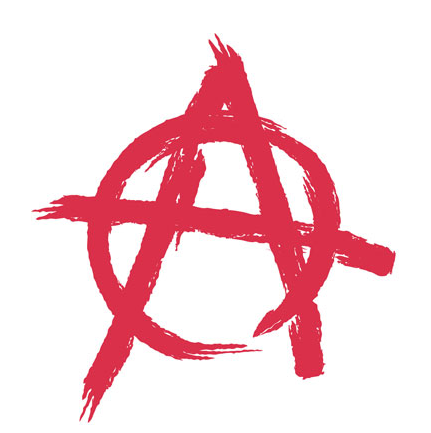 What could anarchism possibly have to do with citizen sociolinguistics?

The word “anarchism” may suggest the big circled A (usually in graffiti form) or even images of “anarchist” punks overturning tables or setting fire to McDonalds— the opposite of responsible citizenship. And certainly a departure from any form of sociolinguistics.

Citizen sociolinguistics as anarchism? Let’s think this through…

First, many forms of anarchism do not involve violence and vand 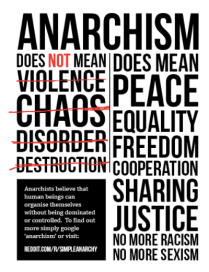 alism.  A google image search yields images representing anarchy as associated with liberty, peace, collaboration, freedom, and mutualism. Rather than relying on overt violence, anarchism usually flies below the radar.  It’s tricky, often clever, and often (for example, in cases of poaching or squatting) a matter of survival.

In his brilliant book, Two Cheers for Anarchism, James C. Scott illustrates that in unobtrusive, yet subtly influential ways, anarchism is everywhere.  He gives examples of everyday forms of anarchism, starting with the most mundane, jaywalking.

Like other forms of anarchism, jaywalking is a subtly coordinated act of rule-breaking. For example, you might decide not to jaywalk when walking with a small child (it would set an unsafe example). But if it’s three a.m., you’re alone with not a car in sight, you might cross at a red light, or even in the middle of the block! As Scott writes, “judging when it makes sense to break a law requires careful thought, even in the relatively innocuous case of jaywalking” (Scott, 2012, p. 5). 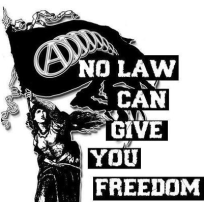 Just as anarchists go out and jaywalk, desert, poach or squat, citizen sociolinguists get online and post videos about “How to Speak Singlish,” engage in lengthy and opinionated dialogue about the finer distinctions of South Philly (Sow Philly) vernacular, post tutorials on varieties of English in Yorkshire (I’m proper chuffed about it!) or engage in Indian language(s) play in the YouTube videos like “Google my Bulbul.”

These acts of citizen sociolinguistics, like many acts of anarchism, are not concerned with developing a coordinated social movement. And yet, like sustained, tacit anarchism, they gradually build valuable knowledge from the ground up, drawing on fine-grained distinctions provided through living locally and perceptively, and sharing that knowledge in everyday ways, often via social media like YouTube and Twitter.

Like anarchists, citizen sociolinguists are usually breaking the rules of “elites”:  Singlish is outlawed in Singapore classrooms. South Philly vernacular or Yorkshire expressions like “I’m proper chuffed” are not considered “proper English.” Videos like “Google my Bulbul” mix languages, defying named language boundaries.  These acts of citizen sociolinguistics, like acts of anarchy, illuminate the workings of human communication precisely by departing from its standardization.  Enforcing rules of language, in many contexts, may seem as silly as stopping at a red light on a deserted 3 a.m. stroll.  Ain’t nobody got time for that!

Just as acts of anarchy are lower-risk alternatives to official political action, acts of citizen sociolinguistics are very low risk.  But they are more likely to affect language use at a local level than more organized, top-down attempts to re-legislate language standards. People use languages in infinitely variable ways around the world–and in ways that change from day to day.  Everyday language use never aligns completely with those narrowly functional standards, frozen in time, laid down in language textbooks or even in sociolinguistics class. Instead, most language users develop fine-grained local understandings of their own language use by using their own language. And quotidian language politics for them takes the form of citizen sociolinguistics: Like everyday acts of anarchism, the posts and musings of citizen sociolinguists illuminate the fine-grained knowledge of those tuned more closely to the workings of the social order than those who are making the laws.

Do you participate in acts of citizen sociolinguistics?  What are they?  Why? Do you see the “anarchism” in them? Or do you more highly value top-down understandings and legislation of linguistic practice? Where do you stand?  Add your comments below!

One thought on “Anarchism and Citizen Sociolinguistics”