The term “Malapropism” describes a lovable feature of our all-too-human use of language—that is, using the almost-right-but-not-quite-right word.  YourDictionary.com illustrates their entry with this example, spoken by the TV character, Archie Bunker:

“Patience is a virgin.”

This example illustrates the layers of possibility within subtle linguistic missteps.  In choosing the words “patience is a virgin” instead of “patience is a virtue” the script-writers pile on a little jokey sexual innuendo and maybe a touch of creepy-old-man, building Archie Bunker’s character as a conservative curmudgeon in the decades-old sitcom, All in the Family.

A good malapropism—like any good joke—may also go down in history. Everyday people seem to remember them and pass them along.  Something about them draws people to savor the language, to recognize its special capacity for creative meaning, and even to make fun of ourselves and the human condition.

The baseball coach, Yogi Berra, was famous for his malapropisms (or “Yogiisms”), and for 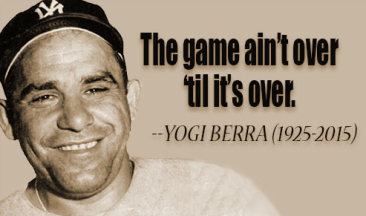 their humor and everyday pithy wisdom.  Phrases like “It ain’t the heat, it’s the humility,” “Nobody goes there anymore, it’s too crowded,” or “When you get to a fork in the road, take it” bring home some shared sense of the absurdity of everyday life.  Rather than bringing out the dictionary and calling Yogi to the mat for being incorrect or nonsensical, people have ended up repeating these Yogiisms-turned-aphorisms.  An internet search yields dozens of sites compiling his top 20 (or 50!) phrases.

Now, Donald Trump has become a modern proliferator of malapropisms:

Unpresidented or Unprecedented When condemning China’s actions in international waters, he referred to their actions as “unpresidented”:

7/11 (The convenience store?) versus 9/11 During his presidential campaign, he denounced the terror attacks on the World Trade Center—those that occurred on “Seven Eleven.”

“I watched our police and our firemen down on 7/11, down on the World Trade Center before it came down.”

Bigly versus Big League Also during his campaign, Trump repeatedly used the term “bigly.” Though his handlers claimed he was saying “big league,” this odd usage stood out so prominently to citizens that memes around “bigly” have proliferated…bigly.

There are probably more, and more serious malapropisms in Trump’s repertoire.  But even this short list suggests a qualitative difference between Trump’s malapropisms and Yogi Berra’s—or even Archie Bunker’s.  Trump’s seem worse.

But, if malapropisms aren’t inherently bad, what exactly is wrong with Trumpisms?

The problem isn’t that Trump uses words in unorthodox ways, but the precise quality of the missteps he makes.  They show none of the qualities of time-tested malapropisms—humor or tacit wisdom.  Granted, the 7/11 gaff may have dark humor to it.  But, generally, Trumpisms are not funny.  He certainly has no sense of humor about them.  In fact, he often tries to correct them immediately by removing tweets (like the “unpresidented” tweet above) as soon as he’s been called out.  Trumpisms shed no wisdom or whimsical perspective on the human condition.  The only tacit message they communicate is (at best) that he doesn’t really care that much.  And no amount of time with a dictionary, grammar book, or linguistics professor will cure that.

Good news: Despite Trump’s use of bigly, unpresidented, 7/11 (for 9/11), and probably many more absurdities, the English language is safe.  Trump may spew malapropisms, but malapropisms in themselves are not bad—they show us that language is alive and inevitably unorthodox at times. Every day, people use words in ways which create new (unpresidented?) meanings.

And who knows, maybe soon we will be unpresidented!  Patience is a virgin.

Please add your comments below! Do you have malapropisms you love or hate?  Any recent Trumpisms to add? What can we learn from these?